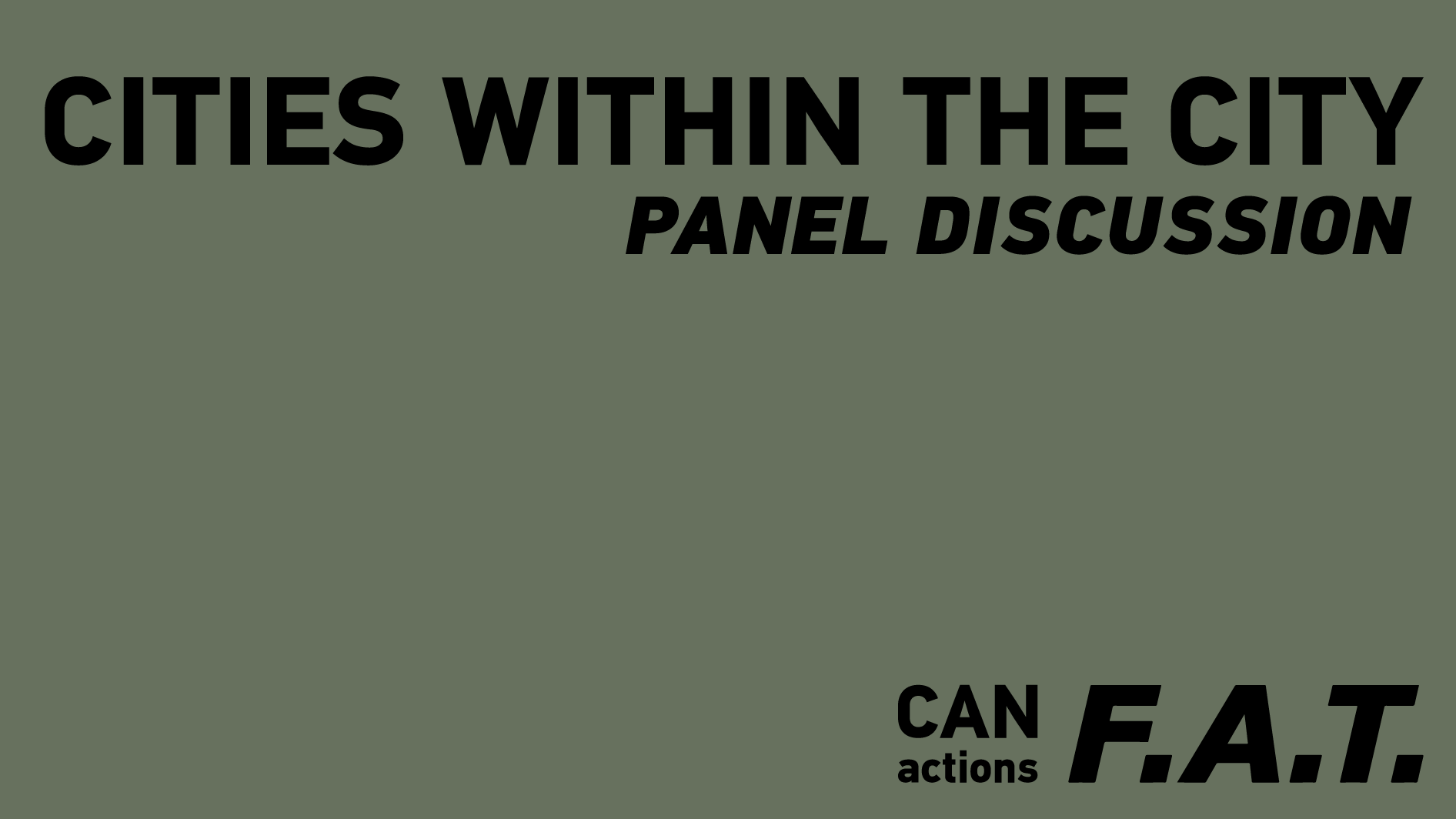 Cities Within The City is the panel discussion that focuses on the topics of density, co-living and anti-gentrification strategies in the city, by investigating the text of: "The Global City: Today's Frontier Zone" by Saskia Sassen and "Post-Familial Communes in Germany" by Niklas Maak, and shared among the participants of the discussion. The content of the selected texts unfolded during the debates, provides a navigation tool capable to polarize the discussion, promote self-positioning and ultimately catalyze the projectable process.

F.A.T. stands for Forum for Architecture Theory; it is a horizontal teaching-learning program based on an open debate about fundamental architecture topics. F.A.T. was founded in 2018 by Fabio Don and Marco Zelli. In 2019 it was nominated emerging creative by the Future Architecture Platform and is currently collaborating with the Lisbon Triennale and the Mies Van der Rohe Foundation.

CANactions School is an educational platform, with offices in Kyiv and Amsterdam. Its mission is to enhance the creation of places and communities where people love to live and work. Since 2015 CANactions School runs post-graduate interdisciplinary Educational Programs in the field of Urban Studies, Integrated Urban Development and Strategic Spatial Planning in a context of local and global city challenges.

Andreas Wirz is an architect ETH and a partner of the Archipel GmbH, an architecture, consulting and planning company. He is involved in the Board of housing cooperatives Swiss Zurich Regional Association of non-profit housing developers. He is also a board member of the student housing cooperative WOKO, a member of the "International Network for Urban Research and Action, INURA" and co-curator of the Platform Cooperatives.

Charlotte Malterre-Barthes is an architect, urban designer, and scholar. Principal of the urban design practice OMNIBUS, she directed the MAS Urban Design with Marc Angélil, and holds a PhD from ETHZ on the effects of the political economy of food on the built environment, case study Egypt. She co-authored 'Housing Cairo: T"he Informal Response", "Some Haunted Spaces in Singapore" and "Eileen Gray: A House under the Sun". A founding member of the Parity Group—a grassroots association committed to improving gender equality in architecture, she co-curates the XII International Architecture Biennale of São Paulo 'Everyday' (2019).

Blanca Garcia Gardelegui is an architect and urban designer with an M.Arch from the Polytechnic School of Architecture in Barcelona. She is currently working in ETH Zurich in the chair of Professor Hubert Klumpner. She has previously worked with Herzog & de Meuron for five years, where she participated in the development of hybrid public buildings like M+ Museum in Hong Kong and Hillerod Hospital in Copenhagen. She worked as an adjunct professor of Architecture at INDA International Program of Design and Architecture in Bangkok University of Chulalongkorn and collaborated as an architect for the United Nations in Geneva.